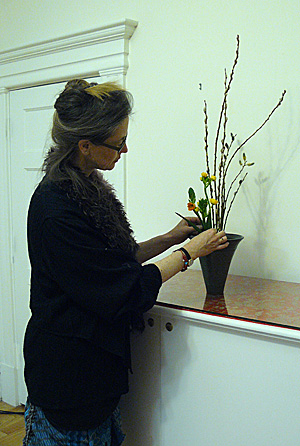 Originating during the reign of Prince Shotoku of Japan in the 7th century, ikebana (kado) has a long history of development as an ephemeral and contemplative art form bringing humans and nature together in uplifted and harmonious expression.

The word “ikebana” is formed from two parts — ikeru, meaning to give life, and hana, plant materials. Ikebana hence conveys that the act of placing plant materials in water gives further life to them, and that the way in which they are placed can express their vitality and presence. One definition of “flower” in Japanese refers to a graceful presence which creates atmosphere. The experience of a flower goes beyond culture and beyond thought. Ikebana is now appreciated as an international art form.

Another term in less common usage, “kado” refers to the “Way of Flowers”, not generally discussed apart from the art itself, but inferred in Japanese culture. For many hundreds of years in the east, the arts have been understood to be a “way” of uncovering and developing the sensibilities unique to human beings. There are many such do’s — the way of tea, the brush, the sword, and so forth. These “ways” are paths to restoring and deepening one’s capacity for fully awakening to the truth and harmony inherent in life itself.

Early Taoist masters were scientists, who used observation of nature to discover the principles of life in our universe. Early Buddhist masters taught the way of meditation as a path to realizing the truth of things as they are. Zen masters engaged the non-conceptuality of the senses, arts and daily life in their approach to meditation. The contemplative art of flowers (ohana) is a meditation in action, where open and full attention of the heart (mind), eyes and hands is involved. The refined instincts of the felt sense are developed by listening to the qualities of the materials through practice and training in traditional forms, unique to each of the many schools of ikebana in today’s society.

Kado is an opportunity to renew the communication between nature and human, through the creation of a new life — that of the arrangement itself. The moment of encountering the branches, flowers, and open space is never to be repeated and cannot be kept frozen in time. One cannot ever truly recreate an arrangement, and the forms themselves are considered a means of eventually going beyond the forms, both of the art and of oneself. Through the practice of ikebana, one’s perception of the world transforms into such freshness as the eyes of the heart/mind (kokoro) open over and over again. This awakens delight in ourselves and other people!

Such a simple thing — to walk, to notice growing things, to cut a branch, greenery, flowers, select a vase, then sit down with a clean bowl of water, lay down a cloth for trimmings, and begin to look at what is there. It is said that this ancient art-form began in exactly this way. In a small Japanese temple by a pond, the nephew of Prince Shotoku placed offerings of flowers and branches within the palace grounds. The first formal school of ikebana (the Ikenobo school created in the 15th century) is attributed to the descendants of this individual, who were moved by his “way” with plant materials.

There is so much to see in a branch, a flower. We could look longer, use less, notice the space around things, and bring our attention back to this moment. Cut off --- one leaf, like taking a word out of a poem, and experience how the whole ikebana piece has changed. Can’t put it back. Impermanence. Beauty. Poignant. Awake. Here. Now. Changing. Like the seasons. Letting go of this leaf, or that flower, becomes a vehicle for life itself, an unusual kind of beauty which can rub the heart raw with tenderness, and give birth to vividness. Pine branches stretch across the water, fragrant needles reflecting. Tiny white buds of plum dot slender nubby branches. Supple stems of tender green hint at emerging yellow petals. The sun reaches the water. No end to falling in love with the beauty that is already here.